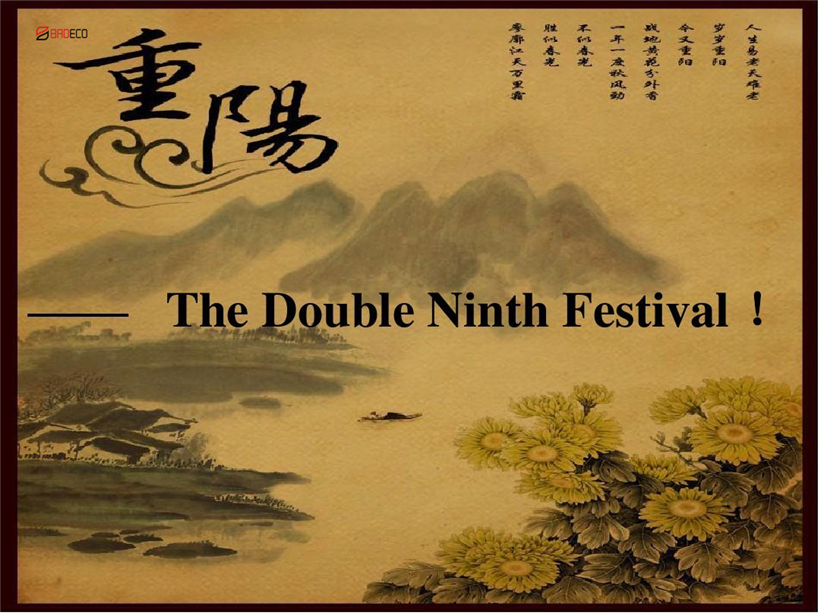 The 9th day of the 9th lunar month is the traditional Chongyang Festival, or Double Ninth Festival. It usually falls in October in the Gregorian calendar. In an ancient and mysterious book Yi Jing, or The Book of Changes, number "6" was thought to be of Yin character, meaning feminine or negative, while number "9" was thought to be Yang, meaning masculine or positive. So the number nine in both month and day create the Double Ninth Festival, or Chongyang Festival. Chong in Chinese means "double." Also, as double ninth was pronounced the same as the word to signify "forever", both are "Jiu Jiu," the Chinese ancestors considered it an auspicious day worth celebration. That's why ancient Chinese began to celebrate this festival long time ago.

The custom of ascending a height to avoid epidemics was passed down from long time ago. Therefore, the Double Ninth Festival is also called "Height Ascending Festival". The height people will reach is usually a mountain or a tower. Ancient literary figures have left many poems depicting the activity. Even today, people still swarm to famous or little known mountains on this day.

On this day, people will eat Double Ninth Gao (or Cake). In Chinese, gao (cake) has the same pronunciation with gao (height). People do so just to hope progress in everything they are engaged in. There is no fixed ways for the Double Ninth Cake, but super cakes will have as many as nine layers, looking like a tower.

The Double Ninth Festival is also a time when chrysanthemum blooms. China boasts diversified species of chrysanthemum and people have loved them since ancient times. So enjoying the flourishing chrysanthemum also becomes a key activity on this festival. Also, people will drink chrysanthemum wine. Women used to stick such a flower into their hair or hang its branches on windows or doors to avoid evilness.

In 1989, the Chinese government decided the Double Ninth Festival as Seniors' Day. Since then, all government units, organizations and streets communities will organize an autumn trip each year for those who have retired from their posts. At the waterside or on the mountains, the seniors will find themselves merged into nature. Younger generations will bring elder ones to suburban areas or send gifts to them on this day.